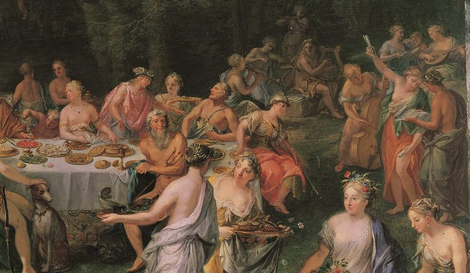 Banquet of the Gods

The Olympic Gods have gathered around a long table in a forest clearing and are enjoying an elaborate meal with musical accompaniment. The many details are interesting, such as the individual figures, exclusive fruit and vegetables and different animals. Guinea pigs, which are depicted nibbling on peapods on the lower edge of the picture, were definitely quite exotic in the 18th century. They came from South America and were only brought to Europe in around 1550 by the great discoverers, where they would definitely have only been kept in courtly circles to begin with.