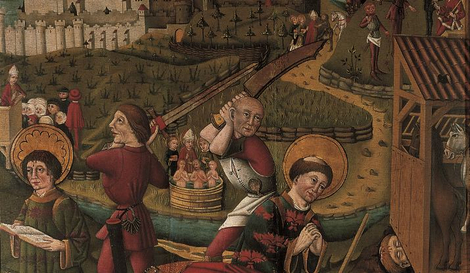 Martyrdom of Saint Kilian and his Companions

The painting shows a number of points from the legend of Saint Kilian and his companions Kolonat and Totnan. They came to Franconia from Ireland in the 7th century to spread Christianity. In the background, you can see the Marienberg Fortress, how it probably looked in the second half of the 15th century (when the painting was created). The Franconian Duke Gosbert, who Kilian converted to Christianity, held office at the Marienberg. Preaching and the baptismal scene can be seen in the centre. The baptism is depicted here in a large wooden tub, like the cooper would make in the late Middle Ages. Gailana, the wife of Duke Gosbert, had the missionaries killed by paid killers. She hired the cook (with the spoon in his belt) and the steward (key ring on his belt) to do this. The missionaries were beheaded, which is depicted quite distinctly with lots of blood. However, the fitting punishment for the atrocity did not take too long. According to the legend, Gailana was summoned by the devil, and the killers went mad. This can be seen in their self-destruction.