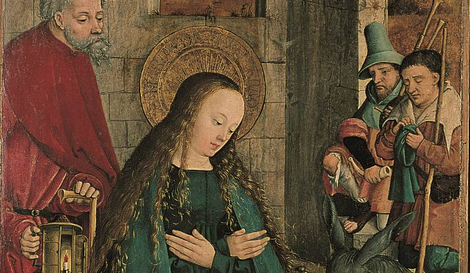 The Birth of Christ and the Adoration of the Kings

The two tablets were part of a Late Gothic altar. They show the Birth of Christ with the adoration of the shepherds and ox and donkey on one tablet and the Adoration of the Kings in their splendid robes on the other. In the background of the picture of the birth, the annunciation to the shepherds is depicted. The stall, in which the Birth of Christ is shown, is depicted here as a derelict ruin. In the dilapidated roof timbering, some constructive details are clear, for example bonds created with a rope or wooden pegs. The Adoration of the Kings gave the painter the opportunity to depict splendid materials made of brocade and velvet as well as jewellery and precious vessels made of gold. They are realistically reproduced masterpieces from Late Gothic goldsmithery. The robes are exclusive examples of noble fashion from the period around 1500.