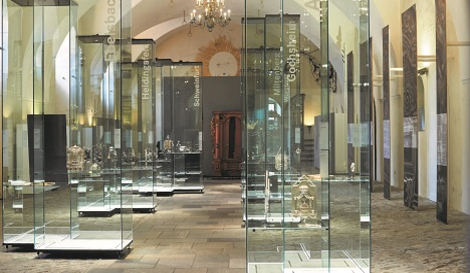 Seven Crates of Jewish Material. From Plunder and Rediscovery in 1938 to Today

The Jewish Museum Munich and the Museum of Franconia are cooperating on an exhibition to put on display about 150 ritual devices from Lower Franconian synagogues which bear testament to the lively Jewish life which was wiped out during the Shoah.

The objects on display were rediscovered in the storerooms of the Museum für Franken when the entire collection was being digitally recorded in 2016. They were viewed and researched by Bernhard Purin, the Director of the Jewish Museum Munich, who was able to demonstrate that the individual objects came from the synagogues in Arnstein, Ebelsbach, Gochsheim, Heidingsfeld, Miltenberg, Schweinfurt and Würzburg. The objects were stolen from the synagogues by representatives of the National Socialist regime during the pogrom in November 1938. It is not fully understood how the objects ended up at what was then the Mainfränkische Museum. Their partially fragmented condition suggests that they arrived there before the destruction of the old museum building in 1945.

In 1947, the Museum was supposed to hand over the looted items designated as “Seven Crates of Jewish Objects” to the Offenbach Archival Depot, where the US Army was keeping Jewish property seized during the Nazi era, although part of the confiscated property remained in the storeroom of Würzburg Museum.

The exhibition is divided into four sections. It starts with the history of the Franconian Luitpold Museum, which has gone under the name of the Main-Franconian Museum since 1939, and from the very beginning presented the “art and cultural-historical monuments of the Israelites in Franconia.” The next section has a long storage rack containing the objects which can not be clearly assigned to a particularly community. It recreates the location in which the objects were found in the museum cellar and brings to the fore the collection’s variety. This is followed by an impressive presentation of the objects that can be assigned to the synagogues in Lower Franconian mentioned above. The exhibition concludes by reminding visitors about the complete annihilation of Jewish life in Lower Franconia by the National Socialists.

The exposition features not only exhibits, such as valuable Torah jewellery, Hanukkah candelabra and Shabbat lamps, but also the stories behind the objects, the history of the Jewish communities and the biographies of the donors of individual ritual objects. Many donors were murdered by the National Socialists, others were able to flee into emigration. The exhibition wants to remember them and their precious objects. It was sponsored by the German Lost Art Foundation in Magdeburg and supported by the Landesstelle für die nichtstaatliche Museen in Bayern – the State Office for the Non-State Museums in Bavaria.

An exhibition of the Jewish Museum Munich in cooperation with the Museum of Franconia ― State Museum of Art and Cultural History, Würzburg. It is funded by the German Lost Art Foundation, supported by the State Office for the Non-State Museums in Bavaria.